The purpose of this first tutorial is to explain the very basics of the Arduino IDE which you can download here. Don’t get fooled by its appearance. This IDE might look simple but it is extremely powerful.

In my opinion, what gives this tool its power it’s not only the appearance or the lack of complex features (which makes it easier to use) but all the examples, projects and libraries which are freely distributed by the open-source community. Even though, the Arduino project thrives. In fact, it thrives because it is open-source, like Linux or the Raspberry Pi.

This is how the IDE looks: 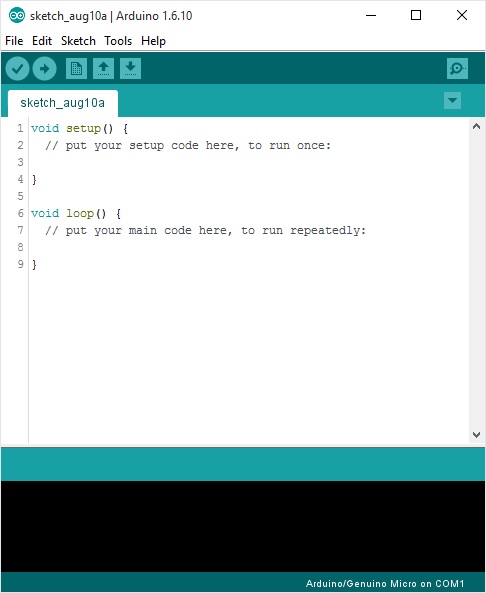 So you can easily understand how the IDE works and to prove we (the open-source community) are right, let’s start with a simple LED blink schematic. For this tutorial you need:

Now you have to replicate the circuit below:

The circuit can be powered via Arduino’s USB port or applying 12V in Arduino’s Vin pin.

The blinking code follows below:

There are three major steps you must understand before uploading the code inside Arduino’s flash memory.

First, you have to select which Arduino board you’re using by clicking Tools > Board. A list of all available boards will appear so you can select the one you’re using. Another menu will appear if the board you selected has more than one processor to choose. Just change it accordingly by clicking in: Tools > Processor.

To upload the program, copy and paste this code into the IDE. Then, click the “Upload” button and if everything is OK you should see the RX and TX LEDs on the board flashing. If the upload is successful, the message “Done uploading.” will appear in the status bar and you should see the LED blinking. Yeah! You’re good 🙂